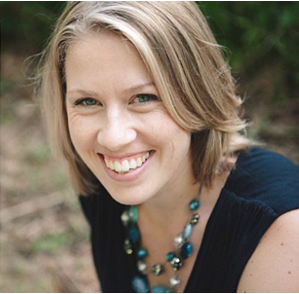 Our move back to the states is counting down. The movers came and went this week. They were in and out in 7 hours. Ridiculously efficient. Now we sit in an empty space that is feeling less and less like home. I’m antsy for that plane ride home. Slowly the freedoms are taken away as we get ready to leave our wonderful host country. I signed over my beloved iPhone already (hello Instagram withdrawals) and we’ll sign the car over in a few days as well. Enoshima was one of the last places I wanted to visit before leaving Japan. Hubby had a last minute trip (leaving me his phone…more importantly google maps) so me and the boys decided to spend the day in the sunshine instead of catching up on math and history.

We’ve been to our fair share of aquariums so I wasn’t expecting much from the Enoshima Aquarium. Logan has been studying sea creatures for science this year so at the very least, we could see some of the creatures we’ve been reading about. While small, the aquarium is really well done. Much of their focus is on the local Sagami Bay and we learned so much about what lies right beneath our own waters here. Most of the displays had English descriptions so there wasn’t much of a language barrier.

We were in and out of the aquarium in about 2 hours. We walked over the bridge to Enoshima Island and explored a bit. This island is wonderful if you have no plan whatsoever. We just walked and explored the shops, shrines, and pathways. We ate sakura ice cream, counted roaming cats, watched the giant hawks overhead and windsurfers in the bay. It was a good day. And the kids behaved.

We learned a bit about Japanese mythology and folklore as well. Even before you get on the island you are greeted by dragons. The statues continue throughout the island. There’s a love story apparently. If I’m getting the story right, a five-headed dragon was believed to have lived on the island long ago plaguing the villagers nearby. The dragon fell in love with the deity Benton and he changed his menacing ways to be with her. The shrine on “dragon’s-mouth hill” is dedicated to her.

Enoshima Island was really easy to get to. The closet train station is Katase-Enoshima. We were done with the aquarium and the island by 2pm after getting to the aquarium at 10am and you could easily go on to Kamakura and make a day of site seeing.